Have you ever had sore muscles?  I’m sure you have.  There’s a lotion that will heal sore muscles and strains amazingly fast.  About 2 years ago, I had a frozen shoulder.  A student of mine gave me a product called “Deep Blue Rub” by Doterra.  When I first put it on, I thought my skin was on fire.  The sensation eventually goes away and you’ll start to feel better after a while.  In other words, it’s a really powerful cold patch (湿布).

Recently I had sore muscle because I walked around too much.  At night I put this lotion on my leg.  I can feel it working right away.  Next morning my sore muscle was gone!  This ointment is very powerful.  I have to warn you the smell is pretty strong so I recommend you put it on at night.  Also if you have any sunburns or scratches, don’t put it on.  The burning sensation might kill you.  Other than that, it’s very effective for sore muscle and strains. 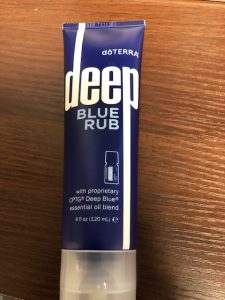 If you want to buy it, you can get it at Amazon.

I have to renew my driver’s license in Septmeber.  To tell you the truth, I think it’s a pain in the neck.  Out of all the places, I can’t stand Hirabari license test center.  It’s always crowded and it takes up my time.  I hate it so much that I don’t want to renew my license, but that’s not an option.  I need my drivers license even though I don’t have a car.  I rent a car from time to time so I need it at that time.

takes up my time – 時間が取られる

from time to time – たまに 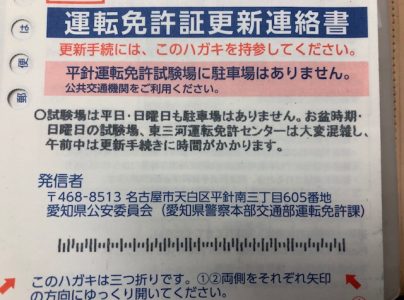 I think most people in Japan don’t know American TV celebrities.  That’s the same for people abroad not knowing who Sanma is.  They can be huge stars in their country but they are not known very well outside.

Let me tell you about James Cordon.  Actually, he’s not American.  He’s  British but he is on every night on an American talk show.  The talk show is very popular because James Cordon can sing very well.  He started a popular segment called Carpool Karaoke.  He invites famous singers to go driving with him.  During the drive, they sing many of the hit songs of the artist.

It’s a really popular TV segment because the viewer can see their favorite artists acting naturally.  The ones I saw recently is Celine Dion and Lady Gaga.  They were really good. Check it out.