The news is currently reporting about road rage and tailgating.  In Japanese, it’s called 煽り運転。

Tailgaiting means to follow the car in front too closely.

This is a common thing that’s seen in a lot of places around the world.  Because everyone has smartphones or drive recorders, these incidents are being captured on video.

There are people who snap easily anywhere.  Who knows why they are so snappy.  Let’s just hope we don’t run into these crazy people.

There are so many creatures on earth that look so weird. Particularly, I’m interested in deep-sea fish.  The most famous deep-sea fish is the Angler fish.  It looks like a pissed-off alien.  The way it gets food is really interesting.  They have a glowing lantern in front of their face.  The light attracts small fish and the angler fish bites them with their sharp teeth.  It’s out of this world!!

out of this world – この世のものではない

There are many kinds of dialects in Japan. Kanto, Chubu, Kansai all have different dialects.    That’s the same in the U.S.  The way West coast (ex. L.A.) people speak is different from people in the East coast (ex. N.Y.)

Today, when I was at MacDonald’s, I heard something really funny.  I was at the cashier and the guy next to me was ordering his food as well.  He was taking his time deciding what to order.  In the end, he said, “can I have Ebi フリャ〜 set”.  I almost burst out laughing.

Then I thought maybe Mcdonald made a special Nagoya menu.  When I checked it, it was Ebi フィレオ (fillet).  So the guy really did say “Ebi フリャ〜”.  The funny thing is he was not an old guy.  He was probably in his 50’s.  This small incident made my day.  I kept smiling as I ate my burger. 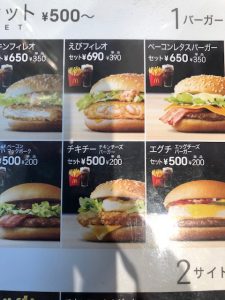