I don’t really like summer much.  Actually, I was born during the hottest days of summer so it’s a bit strange that I don’t like summer.  During summer season, I always feel tired.  Even when I wake up in the morning, I feel tired.  It’s probably due to the air conditioner.  2 years ago in summer, I felt so bad that I started searching the net for some kind of answer.  When I was doing the searches, I came across a supplement called Orinichin.  It said if you feel tired in the morning, you should take this supplement.  It’s made from extract of clams.  Anyhow, I ordered it and started taking it.  3 days later, I felt different in the morning.  I was surprised that it worked so well.  Now every summer I depend on this supplement to get me through the tough Nagoya summer.

I came across a really nice store.  (とてもいいお店を偶然に見つけた。)

He depended on the insurance to pay for the medical expenses.  (保険に治療費を払ってもらうことを彼は頼っていた。)

I need to get though this tough time.  (大変な時期を乗り切らなければ。)

There are some foods that I really like.  Sometimes, I really feel like eating them.  Last Sunday, I felt like eating basil spaghetti so I went to a restaurant called Goemon.  The one I used to go to closed so I went to a different one.  A student told me that there are two in Sakae.  I went to the one under Melsa building.  It was really good but it has a lot of garlic in it so I try not to eat it during the weekdays.  Another food that I sometimes feel like eating is green curry.  I usually go to a Thai restaurant near my school.  Actually, I was just talking about it in class so it made me want to eat it.  I might go there this weekend.

It made me want to…

Talking about Sushi made me want to eat it.   (お寿司の話をしていたら食べたくなった。)

Last year, I bought a new bike in November.  I remember it was on the day of the election and Trump was elected to become the president.  Although I don’t like Trump, I named my bike Donald.  So far I have ridden 1183 kilometers.  That’s over 100 kilometers a month.  Since I ride it a lot, the breaks are already worn out.  I have to squeeze the breaks really hard to stop.  I’d better take it to a bicycle shop or I might hit somebody or something.  Hitting something is better someone.  I don’t want to hurt anyone.

I’ve been busy these days so it’s hard to find the time.  I’ll try to take it to they bicycle shop for repair this Sunday, hopefully.

There was an election last November. (去年の十一月に選挙があった。)

My bicycle tires are worn out.  (自転車のタイヤがすり減っている。)

I like to drink freshly squeezed orange juice. (搾りたてのオレンジジュースを飲むのが好きです。)

I’d better change my brakes on my bicycle as soon as possible. (できるだけ早く、自転車のブレーキを変えなければいけない。) 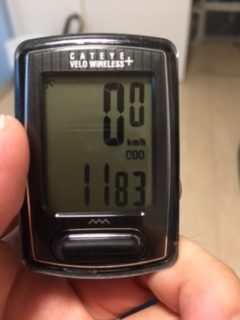 Today, I made a haircut appointment.  I usually go to a hair saloon called Winner Vision in Tokyu Hands.  It’s convenient for me because I can go there from work.  I wanted to get a haircut tomorrow because that was the only available time for me but I couldn’t get it.  I guess I called too late.  I should have called last week. Oh well, I was able to get it this Sunday but I have to come all the way to Sakae on my day off so it’s kind of a pain in the neck for me.

Are you available Tuesday? ( 火曜日に空きがありますか？)

Oh no, the store is closed. Oh well, I’ll just try some other time. (大変、店が閉まっている。まあいいや、違う時にまた来るか。)

You came all the way from Gifu!? (わざわざ岐阜から来たんですか？！)

pain in the neck

Washing dishes are a pain in the neck!  (皿洗いは面倒くさい！)

Yesterday I went to bed pretty early but then I woke up after an hour and could not fall asleep for 3 hours.  I tossed and turned in bed.  I ended up watching Netflix.  I saw a drama called Big Bang Theory.  It’s a comedy drama about a group of nerds and geeks.  It’s pretty interesting.  It make me laugh every time.  When I was watching it, I realized there’s a girl I went to university with in the drama.  We don’t know each other well.  Actually, it’s more like I know her but she doesn’t know me.  We took a class together.

When I woke up this morning, I felt so tired because I slept only 3 hours.  I’ll try to go to bed early tonight.  I have to do a lot of things this weekend.  Hope you all have a good weekend!

I tossed and turned in bed for 3 hours. (３時間ベッドで寝返りを打った。)

I ended up watching a comedy drama. (結局コメディードラマを見た。)

It’s a drama about nerds and geeks. (ガリ勉とオタクの話のドラマ。)

The joke made me laugh.  (ジョークが笑わせてくれた。)