I got a haircut on Sunday.  I go to a hair saloon in Tokyu Hands.  I get a haircut by a guy named Hiroaki Sakakibara.  He’s great.  I like the way he cuts my hair.  I’ve been going there for almost 3 years now.  Last year I was told to get a perm.  He said that it would look good on me.  I was not sure, though.  I thought my hair would look like Yakisoba.  I’ve seen guys with really strong perm and it looks like Hijiki is on their head.  I didn’t want to be Yakisoba head or Hijiki head.  He kept saying I didn’t have to worry and it would look good on me so I finally said “ok”.  My first experience was good.  I actually liked it a lot so I kept getting a perm every 2 months.  I just got it on Sunday but this time the perm was stronger than before.  When I come out of the shower and if my hair is all wet it looks like I have Hijiki on my head!  That’s just fantastic. (皮肉) 🙁

I kept telling him to try it. ( 私は彼に言い続けた。)

I kept going there. (そこに行き続けた。)

There are some things I eat every day.  Those are almonds and plain yogurt with honey.  There’s a reason why I eat those things everyday.  I used to eat a lot of sweets whenever I had a break from class.  It became a bad habit and I put on weight.  Last year, I went on a diet and since then I changed what I eat.  Now, when I’m hungry I munch on almonds.  After I have dinner (usually at school), I eat yogurt with honey.  It’s much healthier than eating sweets every day.

The honey that I use now is from Argentina.  It’s tastes really good.  My student gave it to me just when I ran out of honey.  I told her it was just what I wanted.

There’s a reason why… 「〜をするのは理由がある」

There’s a reason why I want to learn English.  (英語を学びたいのは理由があります。)

Whenever I go to Tokyo, I buy Tokyo banana as a souvenir. (東京に行くたびに、東京バナナを買います。)

I munch on almonds when I have a break. (休憩時間にアーモンドをムシャムシャ食べます。) 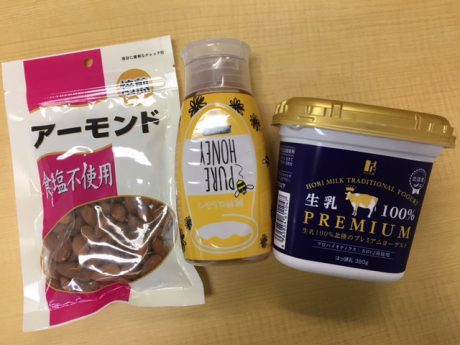 I found a picture that brought back good memories.  It’s a picture of my friend and me.  His name is Mike and we became friends when we were in Jr. High school.  He moved from Michigan to California.  We became friends and hung out a lot after school.  I was his first Asian friend.  In Michigan, there were very few Asian people so for him it was a culture shock to be a friend with a person who ate rice.  He became interested in Japan so he asked me if we could go to Japan together.  We planned our trip and we went to Japan for a month.  I remember it was his first time on a plane and he looked so scared.  We both had fun for 2 weeks but he became annoying and we had a fight the rest of our trip.  I think in the picture below we were probably fighting.  I think this picture was taken in Gero.  My grandmother took us.

Now, he lives in Tokyo as an English teacher.  We are still good friends and talk on the phone from time to time.  He used to visit Nagoya once a year because his ex-wife’s hometown was Yokaichi.  He has not visited Nagoya for about two years now.  Next time I visit Tokyo, I might see him.  He’s still annoying so seeing him for only one day is enough.

The picture brings back memories.  (写真は昔のことを思い出させる。)

We always hang out at the mall.  (いつもモールで遊んでいる。)

He is annoying sometimes.  (彼はたまにうっとうしい。)

(from) time to time  「時々」＊イディオムです。

I visit him from time to time.  (時々彼に会いに行きます。)

There are only 5 restaurants that I go to when I have lunch.  It takes only 5 min to get to each of them.  If it takes any longer I can’t get back in time for class.  Basically I have 30 min to eat and come back.  I’ve been eating at these restaurants for 5 years now and I’m kind of getting tired of eating there.  I wish more restaurants would open up near my school.  Actually one Korean restaurant opened a month ago.  I like it very much.  There are six lunch choices and I’ve tried all of them.  They were all good. I especially like the Bibimbap.

What I wish for is a deli.  I would like to eat healthier food.  More vegetable based food would be really nice. I would be so happy if they opened it 5 min away from my school.

I’m kind of getting tired of eating there.  (そこで食べることに飽きている。)

Next year in March I’ll be taking my students to Melbourne in Australia.  I’ve never been there.  I’ll go with another English teacher and he’s originally from there.  Actually, I prefer going to America because I’m from there.

When we go on school trips, we usually take a road trip.  A road trip is when you travel by a car or bus for a long time.  We have done 3 road trips so far.  We went to Alaska, Grand Canyon, and Yellow Stone.  Each time, we are on a bus for 4 or 5 hours everyday.  While we are on a bus, I have to talk about something.  If it’s America, I can talk about many things.  I especially like American history and movies so I like talking about it.  Next year, we are also going to take a road trip for two days in Australia but I don’t know anything about Australia!  I don’t know what to talk about!  I wonder if I can talk about Koalas and Kangaroos for 4 hours?

I prefer going to America than Australia. (オーストラリアよりアメリカの方が好む。)

Road trip is the best way to travel America.  (ロードトリップがアメリカを旅行する一番いい方法だ。)