These days I often read my E-reader.  I bought it a year ago and it’s really good for me because I can read it at night in my bed without leaving the light on.  There’s one downside, though.  I can only read books and I can’t read anything online.  It’s also black and white.  Actually, that’s supposed to be better for your eyes but I need something to read things online.

That’s why, today I decided to get a tablet that I can see things online and it’s color.  I got it on Amazon.  Actually, this product is also made by Amazon.  It’s their original product.  You won’t believe how cheap it is!  It’s only ¥7000!!  Well, I was able to get a ¥4000 discount because I have Amazon Prime.  I’m looking forward to getting it.

I left the TV on all night.  (テレビを一晩中付けっぱなしにしておいた。)

be supposed to be 「〜らしい」

Black and white display is supposed to better for your eyes.  (白黒のディスプレイの方が目に易し位らしい。)

Yesterday, I got a tablet called Fire Kindle by Amazon.  I played around with it when I got home from work.  It was really cheap, less than ¥8000 yen.  Therefore, the quality is not as good as iPad by Apple.  I still like it, though.  The reason why I bought it is to read things online.  I subscribe to New York Times and it was really hard for me to read it on my smartphone.  Now I can see really clearly.  The display was bigger than I thought and it’s also heavier than I thought.  Still, it’s good for me.

I played around with my new tablet. (新しいタブレットをいじってみた。) 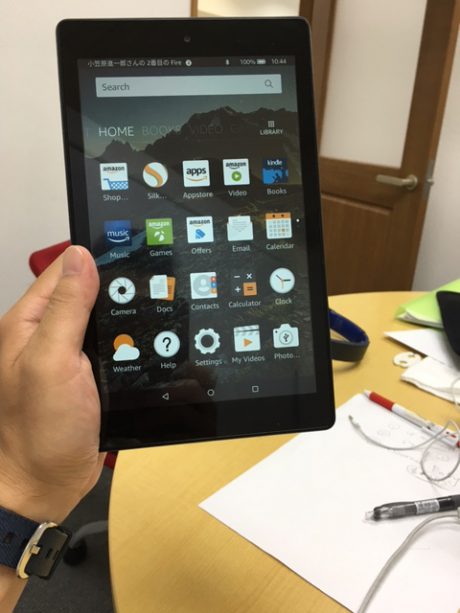 Today was my birthday.  I turned 41.  It’s kind of funny but I don’t feel any different.  I think you are supposed to feel more mature.  Anyway, I had dinner with my girlfriend at a Yakiniku restaurant.  She took me to a new restaurant.  She ordered a course menu.  It started off with tongue and a lot of different types of Kalubee.  Next, seafood dish.  I was already full at this point but came the chicken dish.  I thought I was finally finished but a whole birthday cake came. I need to go on a one week diet!  I had a good time, though.

You are supposed to feel more mature .(より大人になったと感じるはず。)

The meal started off with Tongue.  (タンから食事は初まった。)