Yesterday, I went out to Sakae to have lunch.  I forgot that they were having Domanaka Matsuri on that day.  Everywhere was crowded but I was glad I was able to see some dancing.   When I stopped at the signal, I saw a guy in Fundoshi.   I’ve never seen a guy in Fundoshi before so I took a picture of him and his friend.  His friend was kind enough to pose for me.  Right after that, I saw a red Ferrari.  I don’t know why but I thought about the guys in Fundoshi when I saw the Ferrari. So, I took a picture of the Ferrari too.   I wonder if I thought they were both sexy??  Anyway, I had a good day walking around in Sakae. 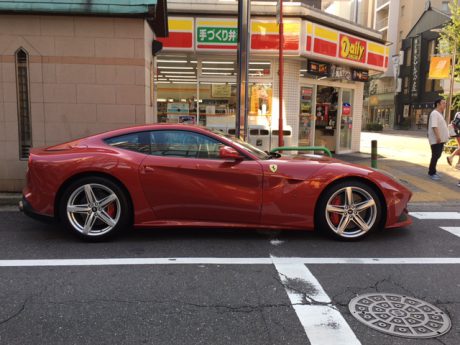 Couple times a month, I always have trouble sleeping.   I woke up at 4:30 in the morning but I couldn’t fall asleep again.  I decided to read a book and after that I was looking pictures on Instagram.  There’s an ugly bird called Rhea that I follow on Instagram.  The bird has no feathers due to a rare disease.  It kind of looks like Tebasaki.  I don’t know why but I find it cute.

Anyway, I started getting sleepy again around 5:30.   When I fell asleep, I saw a strange dream.  In the dream, my pet is a really furry big bird, the size of a cat.  For some reason I have two of these big birds.  When I’m on my bed, they come close to me and try to peck at my eyes.  I have to cover my eyes when I’m with them because they always want to eat them.  I guess, you shouldn’t look at images before you go to bed because they might appear in your dream!

A cat is furry.  (猫は毛がフワフワしている。)

The bird pecked at the food. (鳥は食べ物をつついた。)

Hurricane Harvey that flooded a city of Houston in Texas is on the News.  Global warming is causing these big hurricanes to come a lot.  One student asked me the difference between a hurricane and a typhoon.  Well, hurricanes are formed in the Atlantic Ocean and typhoons are formed in the Pacific Ocean.  Hurricanes are also named alphabetically.  So at the beginning of the year, the hurricanes name start with A, and next B, and C, and so on.  Typhoons are named by the numbers, like #1, and #2, and so on.

I think we will have more and more of these scary storms.  Earthquakes are scary but they hardly ever come.  However it seems like storms are coming almost every year one after another.  I think storms are much scarier than earthquakes.

The rain flooded the city.  (雨が街を洪水にした。)

The storms are coming one after another.  (嵐が次から次えとくる。)

Today, I just stayed home.  I had nowhere to go.  I basically read a book all day and went jogging.  It was a relaxing day.  I think it’s important to sometimes just chill out and not do anything.

I contacted my friend he is a fasting (断食) specialist and told him I would like to do fasting again in September.  Last year, exactly the same time I did fasting for 3 days.  I was able to detox a lot!  Since then, I have kept my weight for a year.  I’m proud of myself.  However, recently, I have been eating a lot of sweets again.  When you do fasting, you learn how to control your appetite so can control your craving for junky food.  I’ll start the fasting on September 20th.  Would anyone like to join me?

I had nowhere to go today. (今日は行く場所がなかった。)

Since then, I have kept my weight.  (それ以来体重を維持できている。)

I want to keep reading.  (読み続けたい。)