Students often tell me very good information.  One of my students told me a food called Galette.  I’ve never heard of this food.  The dictionary says, “buckwheat crepe having a savory filling, such as meat or cheese.”   The student told me there’s a restaurant called La Bobine  in Meiki that has good Galette so I decided to go on Monday.  I went there around 4:00pm so it was not so crowded.  The restaurant had a nice atmosphere and it was relaxing.  I ordered one Galette with chicken (I love chicken :)) and an iced earl grey tea.  The price was ¥1200.  I thought it was kind of expensive but the restaurant is in the middle of Meiki so I understand why they charge that kind of price.  The Galette was delicious but I was still hungry after I ate it.  I thought I would order another sweet Galette but I stopped myself.  I just got done with fasting 3 weeks ago and I didn’t want to gain weight so quickly.

I’m often surprised by how much students know about the new trends.  Whenever I want to know something, I just ask students and I can usually find out.

Buckwheat crepe having a savory filling.

I understand why they charge that kind of price. 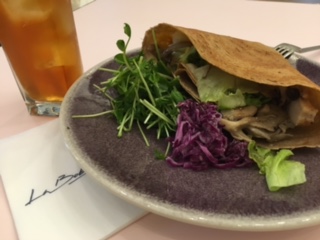 Thursday, October 12   “What are Poke and Guacamole?”

Recently, I get a lot of information about food.  Today, one student was talking about a Hawaiian food called Poke.  In Wikipedia  it says, “Hawaiian raw fish salad served as an appetizer or main course”.  I think in Japan they often put in avocados.  To tell you the truth, I love avocados!  So this Hawaiian dish looks really good!  It seems like it’s easy to make.  If I can, I would like to make it.

Speaking of avocados, have you tried Guacamole?  Guacamole is a Mexican dip.  You mix fresh salsa and avocados together.  You eat it with tortilla chips and it is amazing.  President Obama loves it too!  He once said, “I will eat Guacamole until it comes out of my ears”.  I thought that was funny!

The only place you can eat fresh Guacamole in Japan is at a restaurant called “Fridays”  in Meiki.  I often go there just to eat Guacamole.  The reason why I like it so much is because I grew up eating it a lot.  I lived in California so the food was often Mexican food.  It’s too bad that there aren’t many good Mexican food in Nagoya.  I’ve been waiting 16 years for the trend to come to Nagoya.  I’m sure you will all  like Mexican food.  Please someone, open a real Mexican food restaurant in Nagoya!!!

It’s too bad that 「残念なことに」

It’s too bad that there aren’t many good Mexican food in Nagoya. 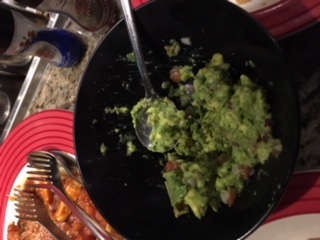 On Saturday, I was invited to a party of an English School.  I know the owner well.  He’s an interesting guy but I kind of disagree with him on his business style.  I thought we could cooperate in making our school better but I’ve decided to part with him.  Sometimes, people are very different from you so it’s better we each go our separate ways.  Nevertheless, I decided to go to his school’s Halloween party.  I know a lot of the students there and I wanted to see them.

I didn’t put on a costume because I felt I was too old for celebrating Halloween.  Actually, most students came without a costume.  I was kind of looking forward to seeing unique costumes but I guess people were not in the Halloween spirit.  One teacher I know who is from Texas was wearing a cowboy hat and jeans.  He looked like a real cowboy, but then he is usually dressed like that in class too.

I ended up going drinking after the party at an Izakaya with students.  It was a fun night.

I kind of disagree with him on his business style.  (彼の経営スタイルと意見が合わない。)

I thought we could cooperate in making our school better. (学校を良くするために協力できると思った。)

I’ve decided to part with him.   (彼と別れることを決めた。) 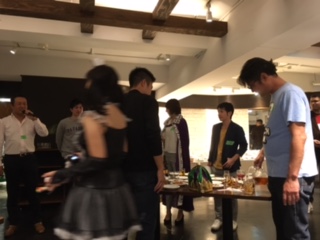