Ever since I was a little boy, I loved riding my bicycle.  I went everywhere with my bicycle.  I still love riding and I sill go everywhere.  In 2012, Lev (English teacher) suggested we go riding from Takayama to Nagoya.  I think the distance was about 200 kilometers.  It would take 2 days to get home.  Another English teacher named Paul wanted to join us so the three of us decided to go on this crazy adventure.

Finally we found a place but it was on the side of the road.  It was a terrible place to put up a tent but we had no choice.  The next day we headed out early in the morning.  We have to ride about 100 kilometers to Gero. The scenery of this road was really amazing!!  Also most of the path was going downhill.  It felt great to ride through breathtaking scenery.   I had a great time on this trip.   Now, I’m thinking if I should ride to Kyoto on my bike some day.

Have you heard of Black Friday?   It’s the biggest sale of the year in America.  Most people try to do their Christmas shopping on this day.   A lot of things become 50% off on this day.   Black Friday is on November 24th this year.  It’s always a day after Thanksgiving.  (Thanksgiving is always on the 4th Thursday of November.)  The reason it’s called Black Friday is because many shops make a profit or they are in the black.

I think, this event will eventually come to Japan.  Halloween finally arrived in Japan so I’m sure Black Friday is next.  Actually Aeon, Uniqlo, Gap, H&M are all having big sales.  Recently, there’s another sales event called Cyber Monday.  That’s when online stores like Amazon and Rakuten will have a big sale.  This year it will be November 27th.

Many people in America will spend a lot of money on these days to get Christmas presents for family, friends and themselves.  One of the really most popular products will be Smart Home Devices.  Maybe, we are not used to hearing about this yet but I’m sure in couple of years we will all have one in our homes.

Many shops make a profit or they are in the black on Black Friday.  (ブラックフライデーには会社は利益を出すか、黒字になります。)

Thursday, November 16  “Proud of my students”

Yesterday, my Master student handed in a designed logo that I asked for.  It looks really cool!!   I’m glad that I asked her to do it.  Now, I’m asking students to vote for which one they like the best.  There are a couple that I like and I will put my vote in after I sleep on it for a while.

The name of my night school is called “Master English”.  Master means you gain a skill really well.   In other words, you master a skill.  The logo she designed reflect that concept.

I feel that mastering a skill is a really big challenge.  You have to spend a lot of time and put in a lot of effort.   However, I also feel it is extremely rewarding.   When you feel that you can do something that you could not do before, you feel empowered.  It’s a great feeling!!  That’s why, I like having my own school.  I want to help students as much as I can to get that feeling of “Yes, I can!!”    All of my students study hard despite their busy schedule.  I’m so proud of them.

Special thanks to Hazuki for making the logo despite her busy work schedule and study time.

I will put my vote in after I sleep on it.  (時間をかけて考えてから投票をする。)

Master means you gain a skill really well.  In other words, you master a skill. 「マスターとはあるスキルを上手にできるようになることです。言い換えるとスキルを取得するということです。」

I feel it is extremely rewarding.  (私はとてもやり甲斐があることだと思う。)

When you feel that you can do something you could not do before, you feel empowered. (以前自分にできなかったことができるようになると、自分の自信と力になる。)

All of my students study really hard despite their busy schedule.  (生徒全員は忙しいにもかかわらず、勉強を一生懸命している。」 Last Saturday, after I finished my class, I got on the Shinkansen and headed to Kyoto.  I got there in no time.   After I got off the Shinkansen, I looked for the rental bike show where I reserved a bicycle for 2 days.  The bike was red and it was smaller than I thought.  It was almost like a kid’s bicycle.  I thought it kind of looked stupid but oh well.  There was nothing I can do.  It was only 1000 yen per day.

I got on the bicycle and headed to Kamogawa.  I found it easily and started riding on a path along the river.   This path was amazing!!!  First, the path was not twisting and turning.  It was straight.  I think if it was twisting and turning, most people would not walk on it because it would take time to get to their destination.   The second good thing was the path was pretty big and some parts had a small fields where school team were practicing sports.  Third great thing was there were many nice restaurants and cafes along the river.   You can spend a whole day just going sightseeing on this river.

I slowly went up the river, taking my time and enjoying every minute of it.  My sister met me half-way and we rode up the river together.  She told me how nice this river is and she will start jogging soon along the river.  I thought it was the best place to go jogging in the morning.  Next time I’ll bring my running shoes so I can go jogging as well.

My sister told me there was one bad thing about the river.  That is there are a lot of bugs!!  In summer, there are mosquitos, spiders, and bugs you’ve never seen!  Her neighbors told her that sometimes you’ll see a spider as big as your hands!!!  If you hate bugs, you might not like living near Kamogawa river.  However, I think it’s worthing living close to it even if there are bugs.

I got there in no time.  (あっという間に着いた。)

I started riding on a path along the river.  (川に沿っている小道を自転車で走り始めた。)

The path was not twisting and turning.  (小道はクネクネしていなかった。)

My sister met me half-way.  (途中であってくれた。) 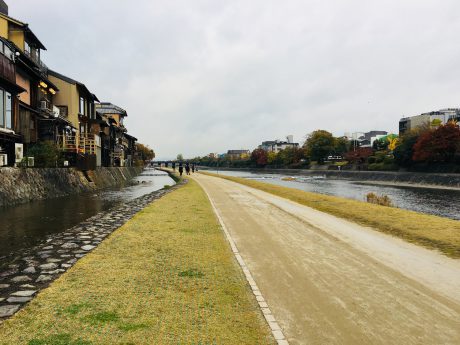 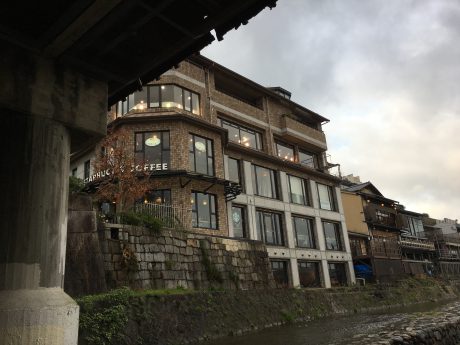