Last Saturday and Sunday I was in Kyoto. I was hoping that I would be able to see the autumn leaves, but unfortunately, I was a little early for it. The leaves had not turned bright red yet. It was either still green or brown. However, I had a good time because I was able to do something different from my daily routine.

I felt that it was important to do something different for a change. When I did something different, I was able to feel and see things differently. I had ideas that I didn’t have before, and I thought about things that I usually don’t think about. For some reason, putting yourself in a different environment makes you think different things. I felt the need to break up the routine once in a while. For me, that means stop going to Starbucks to work.

I felt that it was important to do something different for a change. (気分転換に何か違うことをすることが大切だと思った。)

For some reason, putting yourself in a different environment makes you think different things.  (なんとなく、自分を違う環境に置くことによって違うことを考えさせられる。)

break up the routine 「日常習慣を変える」

I really felt the need to break up the routine once in a while.  (たまには日常習慣を変える必要があると感じた。) 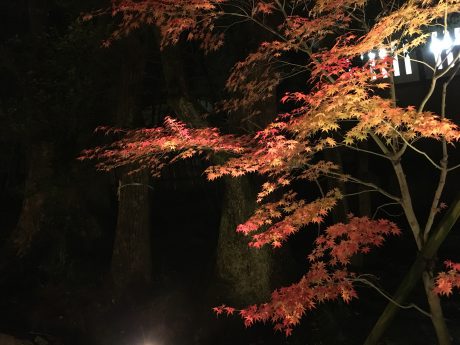 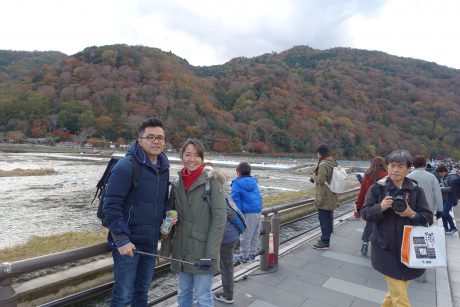 When I was in Kyoto last Sunday, I found a cotton candy store that sold a huge cotton candy. The size of the cotton candy was bigger than a person’s head. There was a long line in front of the store. When my nephews and niece saw it, they wanted to get one no matter what. We got in line, and it took almost 20 minutes to get it.
When I watched them make the cotton candy, I was surprised because the amount of sugar they put in the machine was just a tiny cup. Maybe the cost of the ingredient is less than 50 yen. However, they were charging 600 yen for each one. I thought they were doing great business because the size of the cotton candy is advertising of the product. When people were eating the cotton candies, they are so big that everyone around them would see them.
All the kids wanted one, and when they got it, the expression on their faces is priceless. What a great business!! I was impressed!

The cotton candy was huge.  (綿菓子は巨大だった。)

My nephew and niece wanted to get one no matter what. (甥と姪は何がなんでもそれを欲しがった。)

They put the sugar in a tiny cup.  (砂糖をちっちゃなカップに入れた。)

The size of the cotton candy is advertising.  (綿菓子の大きさが線でだ。)

The expression on their faces is priceless.  (表情はカネで買えない。)

動画→  My nephews and niece getting the cotton candy[IMG_3060] For the last two years, I didn’t eat breakfast.  It’s a health program that I kept because I believed in the health benefit.  However, I broke that routine because of one product that someone gave me.  This product is called “Alberta 100% Pure Honey”.   It’s the best tasting honey I’ve tried.  I’ve been hooked on it for a while now.  In the morning, I cut up an apple and put yogurt on top of it, and after that, I pour this Alberta honey on top.  The taste is pure heaven.

Before I was given this honey, I bought other honey, but I discovered Alberta honey is the best.   It especially goes well with yogurt, whip cream, milk or soy milk. I’m sure you’ll get hooked on it once you try it.

Since I started eating this delicious honey every morning, I became interested in the location where this honey is produced.  There’s a state called Alberta in Canada, so I googled it.  I discovered it’s an amazing place.  The place looks like paradise.   No wonder the bees there can produce such delicious honey.  It made me want to visit this place someday!

No wonder the bees there can produce such delicious honey. This is what Alberta is like.  Check it out!