When I was young, it was difficult to imagine living in the year 2018.  In the movie back to the future part 2, Michael J. Fox goes to 2015.  Back then, I thought the future would kind of look like that.  Most of the things in the movie did not come true but there was one thing that developed faster than we imagined.  That is the internet and how we all access it.  I could not imagine at all back then that internet would become such an important thing for us.   Actually, one of my goals for this year is to really develop this website so more people will have access to it.

I would like to hear what you would like to do in 2018.  Also, I would like to hear what you did over the winter holiday.  Most of my students told me that they are working and they hardly have any days off.  I respect those who work hard!  Actually, I was hoping that I could go to Kyoto but I ended up working at home.  I did a lot of shopping though.  I went to Jazz Dream Nagashima on January 1st.  When I got there the Banana Republic was having a limited time sale until noon.  Everything in the store was 60% off!! I bought 6 items but it came out to only ¥20,000.  That was a great deal!!  Anyway, please let me know what you did in class.  Hope to see you all soon.

Back then, I thought the future would kind of look like that. (当時は、未来はあのようになると思っていた。)

I ended up working at home.  (結局家で働くことになった。)

That was a great deal.  (それはお値打ちだった。)

Last year I went to see Star Wars part 8 at Midland Square.  It was really exciting.  However, I read many reviews by hardcore fans that they were disappointed in the movie. Most non-hardcore fans loved it.  The reason is, this Star Wars movie was made to break away from the old ones.  I think that’s a good choice because everything needs to evolve.  Many moviegoers are not hardcore fans. Many people don’t know about Jedis or the force.  Therefore, I feel this movie was successful in getting a new fan base.

I’m not a hardcore fan but I’m a big fan of Star Wars and I loved the newest movie. Next year, a spin-off of the movie will be released.  It’s the story of Hans Solo.  I’m really looking forward to seeing it.

Many of my students love English movies and I feel that’s a good thing.  However, by just watching it, your English will not improve automatically.  Understanding movies are actually more difficult than speaking English.  There’s a step by step approach to learning how to listen to movies.  I feel, for now, my students should focus on basic speaking.

Recently I saw something on YouTube that made me worry.  It was a video about your nails.  They said that you should have a white colored “half moon” at the base of ALL your nail.

So I looked at my fingers and I noticed I don’t have half moon on my ring finger and pinky!!!!  What the hell????  The video said if you don’t have them, you should go to the doctor immediately!  There’s something wrong with your body!   I started to panic. I googled “half moon on nails” and the information was confusing.  Some sites say it’s pretty serious and other sites say it’s not so serious.  You can never trust information on websites because many people writing them are writing their opinions and not facts.

Anyhow, I texted my sister about it and she said don’t worry about it.  I think the best way to find out is to ask my students.  If the majority of my students have a half moon and I don’t, I’m in trouble. Maybe, I’ll die this year.

By the way, you should know the names of the fingers.

You can look at the image below.  By the way, I did not tattoo the black letters on my fingers.  I’m able to do that on my PC.  Also, it would be a really stupid tattoo!  That would not be cool at all!!

Sometimes when I want to laugh, I watch this video.  The challenge is to try not to laugh or smile at the videos.   It’s a game so I want you to try it.  I guarantee you will burst out laughing.  I love doing this.  I’m usually laughing even at the first video.   Let’s see if you can control yourself.  Tell me in class if you were able to do it.

To tell you the truth, I love Netflix (Online streaming video service).  A lot of my students love it too.  Personally, I think all English students should sign up for it.  I’m not saying your English will get better if you watch it, but I’m sure you’ll like English more if you watch it.

Recently, there was one program that I thought was really cool.  It’s a BBC documentary of regular people trying to get through special forces training.  Special forces are like elite police officers of a country. Most countries have this type of special forces.

Do you think you can last in the ultimate hell training of special forces?  I probably can’t even last 10 minutes in this type of environment.  These people have to try to last for many weeks.  The last person who does not drop out is the winner.  It was so exciting to see it.  I highly recommend you check it out.

Today after class I went to eat at a Ramen Restaurant near my school.  The restaurant is called Muchii 「ムッチー」.   Actually, a young lady that washes my hair at the hair salon recommended I go there.  While she washes my hair, we always talk about our favorite restaurants.  According to her, Muchii is her number one Ramen restaurant.  So I felt I needed to check it out.  The ramen she recommended was 「油そば」。The noodle was really thick and chewy and it had a rich shrimpy flavor.   You can make the size bigger for free so I ordered semi-extra large.  The price was less than 800 yen.  I feel it’s a really good deal.   After I ate it, I was full and satisfied.  I think it’s definitely worth going. 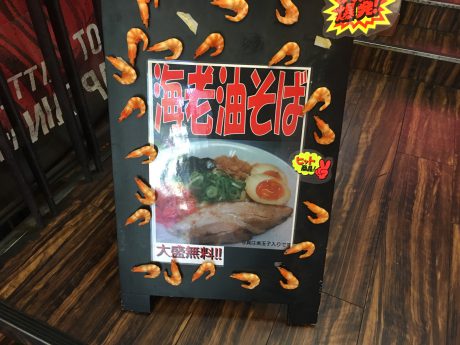