I really like the bicycle that I have now.  I bought it a year and a half ago.  It’s a brand called Cannondale.  Before that, I used to ride bicycles that were cheaper.  I would use it for about 2 years and replace it with a new one.  Since I bought a kind of expensive bicycle this time, I realized that using higher quality things end up being cheaper because it lasts longer.

One time I bought a bicycle that was really cheap and I didn’t even lock it because I thought no one would steal a cheap bicycle. But sure enough, someone stole it!  I guess when you buy cheap things you also don’t treat it carefully.

Now, I would never leave my bicycle unlocked.  I bought a really good lock and I make sure to lock it to a pole or tree.  Sometimes, it takes me awhile to find a pole or tree that I can lock it to.  That becomes a real pain in the neck.  Maybe, I should carry around a pole with me to lock my bike. ：） Tuesday, February 7th  “Power of writing it down”

2 years ago, I figured out how to keep my weight low.  Actually, I read a book called “recording diet”.   The book told me to weigh myself every day and write it down.  I did it and it was very effective.  When you weigh yourself every day, you know when you are putting on weight so you naturally start eating less.  If I don’t weigh myself, I’ll keep on gaining weight without knowing it.  It has become a habit for me to watch my weight so I think I’ll be able to keep an ideal weight for a long time.

I feel that writing something down is really important when you want to change something in your life.  All of you are studying English and you would like to speak English better.  I think it’s really important to write down what you want to say in English in the form of a journal.  This helps you think in English and remember new words in English.  Once it becomes a habit to write, it will get easier and easier.   Only through repetition, we can really master a skill.  It’s the most powerful and effective way to learn.

Yesterday was 「肉の日」(２月９日)。A student mentioned it in a journal and I was reminded that when I saw a hamburger advertisement at a fast food restaurant. I had not eaten dinner so I decided that I’ll have it for dinner.  Actually, my favorite hamburger restaurant is a store called “Handsome Burger” but it was too far for me to walk and it was also raining so I had to settle for Lotteria burger.  Since it was “meat day” they were having a special deal on a hamburger with 3 patties!!  I knew it would make me fat but oh well!  Sometimes, you just have to enjoy life.  When I got the hamburger, I was really disappointed because it looked nothing like the picture.  I thought did the sales clerk sit on my hamburger before she gave it to me.  It was squashed and the color didn’t look good.  I thought I should’ve just walked to “Handsome Burger” despite the rain!  When I tasted it, it wasn’t as bad as I thought so I was relieved.

In life sometimes you just have to settle even if you are not satisfied.  However, next time I’ll definitely walk to Handsome Burger even if it’s raining or even snowing!! 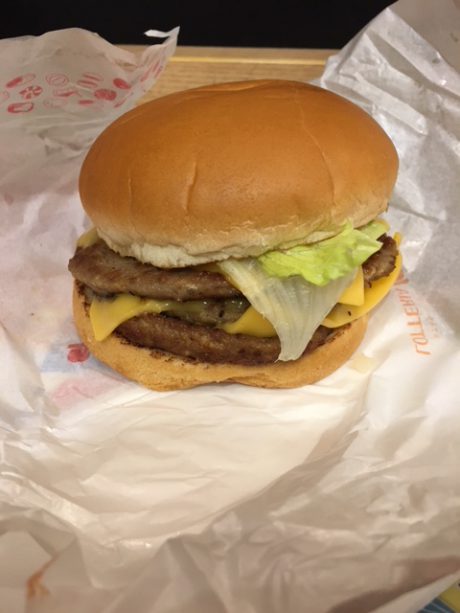