I like going to cafes and spend time reading.  It’s the best way for me to relax.  I usually go to Starbucks but what I don’t like about  Starbucks is that it’s really noisy and crowded.  I usually have no choice but to go to Starbucks because it’s the closest cafe from school.  However, my student let me know a cafe that’s close enough for me and much better than Starbucks.  It’s called Cafe One.  It’s one more block West of Starbucks.  It has really nice atmosphere and nice food.  The food is light and healthy.  They also have free wifi so you can work there.  It’s a perfect environment for me.  Last time I went there, I ended up just watching Netflix there though.  Next time I go there, I want to do something a little more productive.  If you have a chance, check it out.  I’m sure you’ll like it.

I have no choice but to… 「せざるをえない」 On Wednesday, I don’t have Master English Course so sometimes I have a chance to go out.  Today, I went to a networking party.  Networking party is where you meet different people who are in different fields.   I go to these parties once or twice a year.  This party is held by a successful business person who runs a steel company in Hiroshima.  Surprisingly, his younger brother is the owner of Samantha Thavasa, the bag company.  They are really successful!  I’m amazed at their business!!

I was able to meet many kinds of people at the party.  We exchanged our business cards and talked about what we do.  Everyone there was full of ambitions and dreams.  Speaking of business cards, my student made me a Master English business card.  It looks awesome!!  I’m really satisfied with it.  She’s really talented and she also has a dream.  Having a dream in your life makes life so interesting.  I also intend to keep pursuing mine. 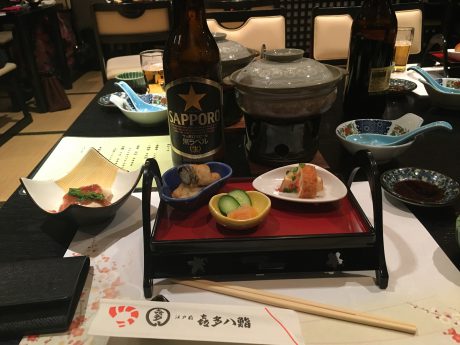