I  went to Toyota’s Oiden Matsuri for the first time.  It was held last weekend.  As you know a big typhoon was approaching last weekend.  I often have bad luck with weather. I seem to always attract really bad weather on special days.

The finale blew me away.  They shot off a lot of fireworks at once.   The sky filled with fireworks.  There was also a full moon out which made it more wonderful.  I was impressed how beautiful everything was.  I hope I can go again. 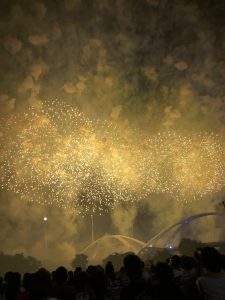 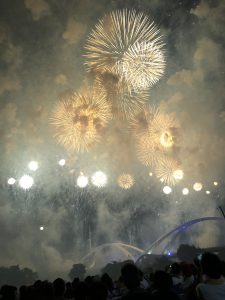 In Japan, it’s really difficult to find good Mexican restaurant.  I’ve been complaining about this since I came to Japan.  I’m from L.A. so I grew up eating a lot of Mexican food.  I think 70% of my body is made up of Mexican food.  I ate it almost every day in High School.  That’s why, I really miss a restaurant called Chipotle (チポトレ).  You can’t  find this restaurant in Japan yet.

One of my students just went to America and she visited Chipotle.  She was kind enough to get me a Chipotle Salsa as a souvenir.  It was really nice to see something from back home.  I’ll enjoy eating it with tortilla chips.

I remember when I took my students to San Francisco 3 years ago, I took them to this restaurant.  Most of my students don’t really like Mexican food but when I made them try it, they all said it was good.  I wanted to say, “I told you so!“.  I’m waiting for the day Chipotle will come to Japan.  I’m sure it will come but the question is when?  Maybe, I’ll write a letter to the president of Chipotle to open a Chipotle in Sakae!  If it ever comes to Nagoya, the whole school is taking a field trip to Chipotle!  Let’s keep our fingers crossed. Found a video of how you can order food at Chipotle.  Check it out.

I can’t drink at all.  I wish I could though.  Ever since I was young, I’ve had problems drinking.  When you are young, you want to go drinking with your friends but I was one of those guys who sat with a small glass of beer for hours.  Whenever I pushed myself to drink, I really felt sick.  I often threw up afterwards.  People say that you just have to get used to drinking but I could never get used to it.  In a sense, I’m allergic to alcohol.  Basically, I’ve given up on driking.

One of my students gave me a bottle of plum sake for my birthday recently.  She said this brand is really good.  I decided to try it.  It tasted really good. I took maybe 3 sips of it and in less than 5 minutes I was feeling really good.  I didn’t feel sick and after an hour I was back to being sober.  I think this Sake is perfect for me.  Since I take only 3 sips per drink, it will take me a long time to finish this bottle.  I’m glad I got this as a birthday present.