On Saturday, I went to Nagoya Castle summer festival.  There were a lot of food stalls and I tried 4 of them.  Actually, the food did not taste good at all.  I was disappointed but the atmsophere of the place really puts you in festive mood.

People were dancing Bon Odori.  I decided to give it a try.  It was harder than it looked.  There was a song that I even knew.  It goes like this, “Tsuki ga~ de ta de ta, Tukiga~ de ta, ah oiyoi”  Well, something like that.  I saw both the young and old dance and there were even some foreigners dancing.  It made me feel really happy inside.

I think traditions like this should never disappear.  I think fewer and fewer people dance Bon Odori compared to long time ago.  There are some things we should always try to keep.  I think Bon Odori is one of them.  I look forward to going again next year.

Another Mission Impossible movie is now playing at the theaters now.  I would like to see this one.  I’m not particulary a fan of the Mission Impossible series but I am a fan of Tom Cruise.  In this newest one Tom Cruises does almost all of the stunts in the movie.  He is like the Jackie Chan of United States.  Many people are worried about his mental health?  It’s pretty crazy for an actor to do the stunts of a professional.  He can get injured badly and in the worst case, lose his life.

I heard that the movie was planned without a story but it was made around the action scenes that Tom wanted to do.  They filled in the story later.  That’s why, I heard the story is a bit hard to understand.  What a crazy guy!!  He’s already 56 years old!!  I wish I could be crazy like that when I become an Oyaji.  Oh wait, I’m already an Oyaji myself.       😜

During summer vacation, I got a chance to go to a place called Kaida Kogen in Nagano.  I chose this place because I had only 2 days that I can spend there. The drive was about 4 hours.  It was longer than I expected.   My google map showed it was about 3 hours but it turned out to be a long drive.  The scenery was beautiful and the food was great.  I had a really nice time.  I’ll write more about it in my next entry.

This is a picutre of Mt. Ontake in the background. 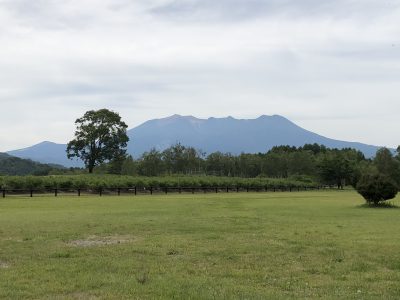