I was wondering recently when will self-driving cars be available.   I surfed the net to find out and the answer I got was surprising.  Many automakers are planning to release self-driving cars by 2020!!  Can you believe it??  That’s the Olympic Year in Japan!  It was hard to believe but it’s true.  Actually, in America there are already many self-driving cars going around in Arizona!  Google launced a taxi service called Waymo.  It’s already in service today.

Did you know there are 1.3 million people die every year in car accidents.  94% of that is just human error.  If driverless cars are introduced we will hardly have any car accidents.  It will save so many lives.  I definitley think we should all use this new technology as soon as possible.

Couple of months ago, I got a souvenir from a student that went to the U.S.  It was a Salsa dip.  It’s from my favorite supermarket Trader Joe’s.  I was really happy when I go it.  I have one problem though.  The lid is shut really tight so I can’t open it.  I tried to open it many times but it’s stuck.  I’ve been working out but I guess my strength is still not enough to open it.  I wrote about this in my blog couple of months ago.

Recently, a different student gave me the same souvenir.  I think she meant it as a joke because she knows I can’t open it.  Now I have two jars that I cannnot open!!!!!

I’ll keep on working out until I can open it. 😂 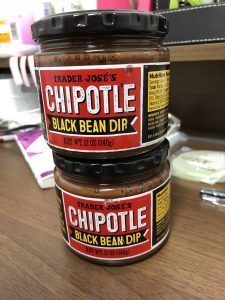 The student who gave me the Salsa Dip saw that I could not open the jar and she came to the rescue.  She brought a handy jar-opener and we opened it together.  It took two tries but it finally opened.  I can finally eat it now.  I need to go get some tortilla chips for it now.  I’m looking forward to eating it this week.

Last Friday, I was really craving for hamburger so I went to Handsome burger.  I usually don’t go out on weekdays but I really wanted to eat it so I went all the way there.  It was really satisfying!!  It’s still the best hamburger store in Nagoya. 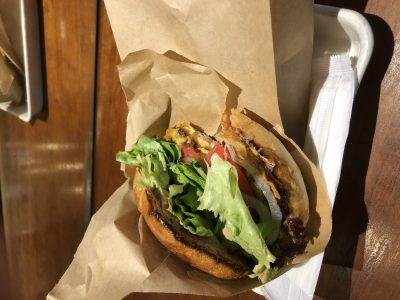