On Friday, I took a road trip to Koranke and Obara.  Before heading out there, I was told by many students that the road will  be extremely crowded.  One student told me a secret way to get there without any traffic.  It was a route heading for Toyota and through a park called Kurage-ike and heading up to Koranke.  My student was right.  There was no traffic at all!  If I’d taken the regrular road everyone else had taken, I would’ve been stuck in traffic for hours.  I even had enough time to go to a place called Obara as well.  Even after visiting both places I was back home before dinner time.  I’m glad I got to see Koranke and Obara.  It was my first time to visit both places.  Actually, I was too early for the autumn leaves.  The color has not fully changed yet.  It would have been better to go next week but oh well, I wouldn’t have time anyway. 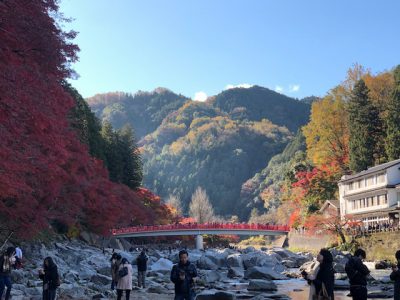 Last week, I got to see Bohemian Rhapsody.  It was an inspiring movie.  I understand why my student saw it two times.

Freddie Mercury was an extremely talented performer.  My favorite line in the movie is when he says, “I’m going to be what I was born to be, a performer, to give the people what they want.”

At the same time, Freddie Mercury struggled with his sexuality because in those days there was still a lot of bias toward gay people. It seemed like this emptiness made him go out of control with his life.  In the end, he realizes that the happiness he sought for was always with the people he most loves.  His last performance was truly amazing!  That performance is said to be greatest live concert ever staged.  I totally agree with this. I’m glad I had a chance to see this movie.

Recently I got a bath mat that blew me away.  It’s made from a special soil.  It quickly absobs and evaporates the water.  You can get it at your local Nittori for only around 1000 ~ 2000 yen. (Depending on the size)  It’s called Keisodo bath mat.

After using this mat, I’ll never go back to using regular fabric bath mat.  The great thing about this Keisodo is that you never have to maintain it.  With regular bath mat, you have to wash it regulary.  You don’t have to do none of that with Keisodo.  I recently found out about this product.  Did you all know about this???    I’ve never seen it at people’s homes but then I don’t really have a chance to go to people’s homes to check out their bath mat.  If you still don’t have this product, you have to get it!!