One of the animations I loved to watch when I was a kid was Arare chan.  The newer generation might not know this animation but it’s a classic.  All the characters are so funny.  I especially liked Supa-man and Pa-zan.  They were taken from American Superman and Tarzan.  In America, these characters were idolized as heroes but in Arare chan they are just goofy people.  I remember Supa-man would eat Umeboshi and say I’m Supa-man.  It’s so hilarious.  Pa-zan often had snot running down his nose and he would crash into a tree when trying to swing from tree to tree.  I loved how Arare chan made fun of American heroes.  The creator of this amazing animation is Akira Toriyama.  He’s also a creator of Dragon Ball.  I didn’t know this but apparently, he’s originally from Nagoya and Wikipedia says that he lives in Kiyosu City.  Can that be true?!

The pasta we know in Japan as “Peperoncino” is really called “Aglio, Olio e Peperoncino”  (アーリオ オーリオ ペペロンチーノ). Aglio means garlic, Olio means Olive oil and Peperoncino means red chili pepper.  It’s the simplest spaghetti pasta you can make.  I love making it.  I’m so good at making it that I can make it in 10 minutes or less.

Some of my students love watching YouTube videos of animals and kids.  I love watching people make pasta.  It comforts me.  This year I’m going to become professional pasta ojisan.

I just made it last weekend.  I was very pleased with how fast I could make it and how good it tasted!  Making Peperoncino is the basic level of becoming a professional pasta man.

This is my pasta but I had no red chili pepper so it’s not really Peperoncino.😅 haha 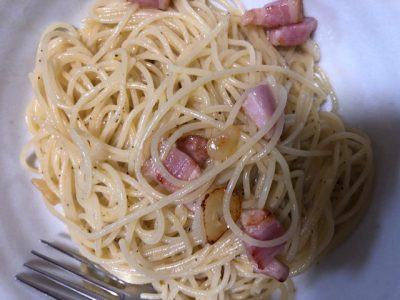 Last year I was surprised to know that my blood pressure was really high.  It was often 150 over 110.  The doctor told me I might have to take some medicine.  Since than, I’ve been careful and my stundents have given me many good advices on how to lower blood pressure.

I’m happy to tell you that my blood pressure went down to 126 over 75!  I was really happy of the result.  Last year I also had polyp taken out.  They tested whehter it was postitive for cancer.  Fortunately, it was negative.  I was really relieved to hear that.  In 2018, my health was not that good but I guess I’m ok now.  The new year just started and I’m ready to take on 2019! 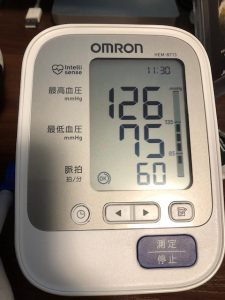